Went into London yesterday - to meet up with John & Cressa who are over from Canada on holiday at the moment (and A & P were coming along to meet them as well). Our original plan was to get up at a reasonable hour & maybe go to the museum before meeting them as we weren't meeting up till 4pm. But that was foiled by J being knackered & me staying up till nearly 2am hunting zombies! So we didn't get up till 10 & had a lazy start, meaning that we left the house at 1 just about bang on time for getting to central London in time. Journey in was mostly smooth - with only one slight panic when we got to Cockfosters where we normally park & discovered the car park was full! I was prepared tho - and had a wee map printed out so could navigate us to High Barnet, where we got the last car park space (much to the disgust of some other car that had overshot it and was coming back for it ... ). We'd assumed this disaster was because we were so late but when we met up with the others A & P told us that they'd got to Cockfosters at about noon & had the same problem - they'd then had a real mare getting in coz they'd parked at Watford only to discover that the Metropolitan line was dead for the weekend, so they ended up only getting into London at 4 even tho they'd planned to be there for the early afternoon :/

Anyway, once the journey was over, we actually did all successfully meet up - couple of phone calls required to locate each other, but we did in fact recognise John (having last met him about 10 years ago or so - before we moved house, anyway, so more than 8 years) and he recognised us, so that all worked out ;)

I wasn't sure if they'd have a plan, coz I'd been singularly unorganised (somehow the summer had seemed overwhelming back in June, so I was organising things on a one at a time "after this then that" basis, which meant this trip was only thought about after Nat's birthday). But in the morning I'd had a quick look at the map and planned out a brief walk round iconic London sights, just in case there was no other plans, and crossed my fingers for good weather coz most indoor type tourist things seemed to shut by 5, so too early for us.

We ended up following my plan - and it even didn't rain much (we did shelter under a bridge for a bit to let the heaviest shower pass over tho). So with the help of my trusty A-Z I took us from Leicester Square down to Trafalgar Square, then via the Admiralty Arch up The Mall (with a detour through the edge of St James Park to get ice-cream & see some greenery) to Buckingham Palace. Then along to the river, past the Houses of Parliament & Big Ben, and along the Embankment looking across at various buildings including St Pauls (& the London Eye) to Cleopatra's Needle (that was for J's benefit primarily). And back to Covent Garden. Where everyone declared themselves walked out, so we didn't go look round the shops etc there. John & Cressa seemed to appreciate the little tour, so I felt quite pleased with myself ;)

Food was a little less well organised - we so rarely eat in London when we're not going somewhere, so we don't have favourite restaurants or anything like that. And I'd ended us up right near Covent Garden in the middle of theatre land, so places were pretty busy. Tried to get into Cafe Rouge where the waiter very politely didn't laugh when I asked for a table for 6, but I could tell he wanted to ;) I'd spotted somewhere that did fancy sounding burgers tho, that didn't look full, as we walked past. So we headed back there - called Byron, and in retrospect it was a bit too US themed to take North American visitors to (even if they were Canadian), and whilst the food was filling and tasty, I wasn't inspired by it so will likely not go back.

But still, while sitting there I had a sudden inspiration about what to do with the rest of the evening - it was a given that it'd be spent in a pub, preferably with proper beer (coz John is also into his beer - part of their holiday so far had involved going to Swansea for a beer festival). And I suddenly realised that we weren't that far from High Holborn and thus we weren't that far from the Princess Louise! So after we were done with our food we headed up there, and lucked out & got seats too :) The rest of the evening was therefore spent sampling the beer there (well, those of us able to have a beer - J & A were both driving so stuck to the soft drinks) - and I also bought Cressa a pint of shandy coz she'd wanted to try it but John wasn't ordering it for her coz it was a bit of a girly drink ;) 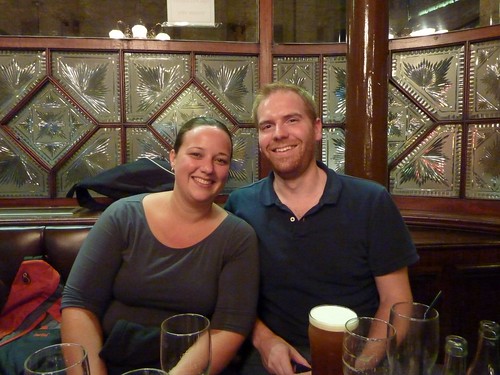 Sitting in the Princess Louise at the end of the evening :)

Pics from the trip now up on flickr/facebook - starting here on flickr & moving towards the newer ones :)