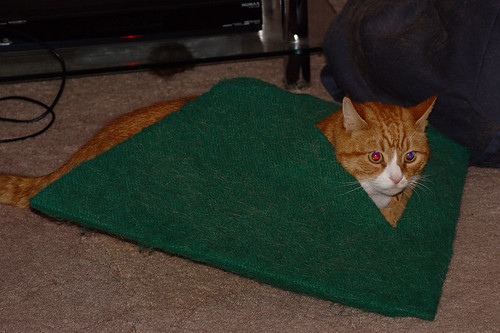 In lieu of content have a picture of the cat from back in November - the green thing is a pyramid. Well, a carpet covered bit of cardboard which was roughly pyramid shaped with a door (hole) in one side. Worth the ~£1.90 we paid for it, but not worth the original £10 that Focus were trying to sell it for.

The cat squashed it flat pretty quickly, he didn't really fit in it after all. But every so often he does this mad run-round-the-house-like-a-nut thing, and that time he ended up half in his pyramid. I don't think he quite knew where he was, how he got there, or what to do next. So I took a photo ;)
Collapse