The British Museum currently has an exhibition on the art of drinking in Asia called "Ritual and Revelry" which runs through till 6 January. We visited it on 23 November as we were in London for a concert that evening.

The bulk of the objects in the exhibition were in a single room in the museum - with just a couple in the room immediately before it. They were laid out in three groups according to their use. On one side were pots, jugs and pictures of these things that were used in ritual & religious contexts. On the the other side were the same types of things but they were used in social contexts. And in the centre were four cases, 3 of which were to do with tea drinking and the last was about bhang drinking. Or you could see it as divided between vessels primarily used for water, vessels used primarily for alcohol and those for tea (listing them in the same order). Each section had objects from right across the sweep of Asia, so you could see the similarities between the areas, and the interconnectedness of the different cultures. 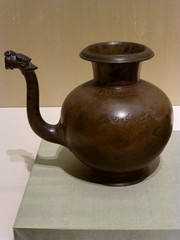 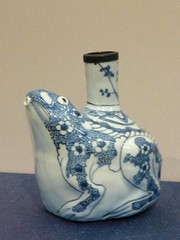 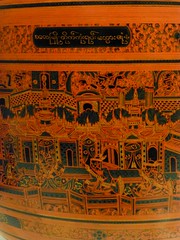 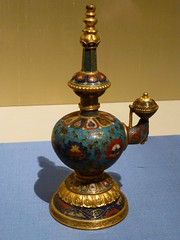 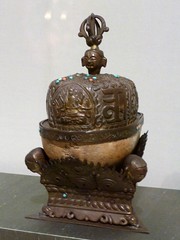 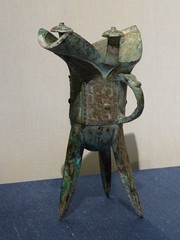 The ritual side of the exhibition was mostly concerned with water containing vessels, such as the Indian lota which were originally made from gourds. The various different pots could be used in a variety of ways, and it seemed most started out as everyday water containing pots made out of gourds. Later they were made out of metal (such as bronze) and also gained religious symbolism. They could be used for drinking water or for pouring water as an offering, or over oneself as a ritual cleansing procedure. There were also some more startling objects - including a cup made with part of a human skull, which is used in some Buddhist rituals. Sometimes filled with human blood! I think, tho the label wasn't clear, that that would be as an offering not as a drink. 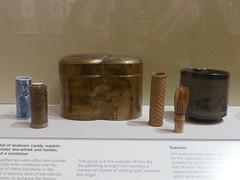 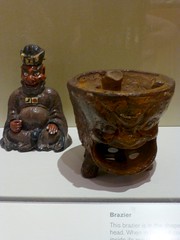 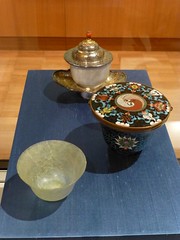 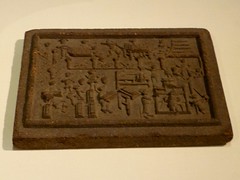 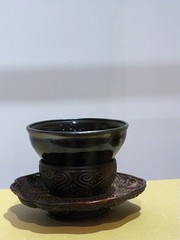 I didn't know that when tea was first drunk it was made from dried & powdered tea leaves, which were whisked into hot water rather than steeped in a tea pot. Tibetan butter tea is still made like this (using yak butter as well as water and tea, frankly it sounds vile to me but it's probably very nutritious). The tea is imported into Tibet in bricks, just as all tea used to be sold. Steeping tea didn't really take off until the 15th Century, and then a change in apparatus was needed - the more familiar to us teapots and strainers, rather than whisks.

The middle section also included a case with some paintings of people drinking bhang which is a drink I'd never heard of before. It's made from the flowers & leaves of the female cannabis plant, and is hallucinogenic. It can be drunk, or smoked in a hookah. 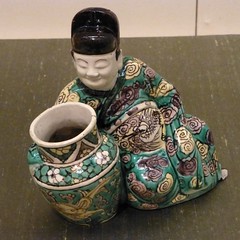 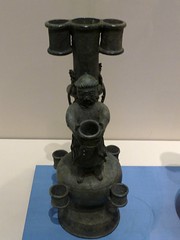 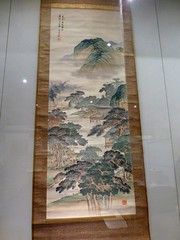 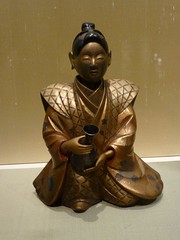 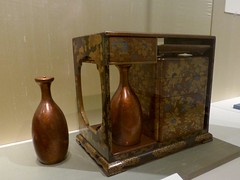 The third section, on the social side of drinking was about alcohol. I was astonished to find out that "toddy" is an actual drink - it's Indian, and mildly alcoholic and made from palm sap. The jugs used by the toddy tappers to collect the palm sap look very like the lotas displayed over in the ritual section - and are still made out of gourds.

A large part of this side of the exhibition concentrated on the Chinese - particularly the Tang era poets called the Eight Immortals of the Wine Cup, who were renowned for producing their greatest work whilst drunk. There were also vases that were used in Chinese tradition drinking games - you aimed arrows at the openings in the pot, and if you failed to hit then you had to have a drink of something alcoholic. Obviously this would be a bit of a vicious circle ;) The Japanese objects here were all to do with sake - I particularly liked the slightly recursive sake bottle in the shape of a young man holding a sake bottle. Sadly you didn't pour the sake out of the bottle opening, instead you took the chap's head off to pour.

I've got more photos up on flickr, in this set.

Retail: As it's not a major exhibition there wasn't a dedicated shop immediately after you left, so I'm not even sure if there was particular stuff relating to it. They do normally have tea sets and sake sets in the shop, so perhaps that was it. I should look and see if there's a book next time I'm at the museum.

Stuff I should know more about: More of the history of the countries that make up Asia - I'm starting to rectify my lack of knowledge of Chinese history soon (I have a book to read, anyway), but I still have not much of a feel for Indian history let alone the rest of the continent.

Other exhibits: We also went and looked at the new information they have up about the 3500BC (naturally) mummified man in the Pre-dynastic Egypt gallery. They CT scanned him, and have (possibly temporarily?) got a touch screen display set up where you can look at the pictures this generated. It has a 3D image of the body, and you can move it around, look at various levels (ie skeletal, or with muscles etc). And look at cross sections. It's pretty neat to play with (tho we did have to wait a while before we could look properly), and well labelled. They discovered from the CT scan that he was probably killed by a knife thrust through the back of the left shoulder - so quite probably a murder victim. And once you've seen it on the scan all labelled up it's nice to be able to look at the actual mummy and see it there as well.

Other places: That evening we went to a performance by Niyaz, of which more another time.
Collapse