While we were in Oxford after Christmas we went to the Ashmolean Museum - J looked at the Egyptian stuff and I took the opportunity to visit one of the exhibitions they had on, as well as having a look at the early Chinese gallery to look at the sorts of things mentioned in the book I am reading.

Threads of Silk and Gold

This is an exhibition of embroidery & other textile crafts from Meiji era Japan, which is 1868-1912. During this period there was a lot of European influence on the designs made by Japanese craftspeople, and also a big European market for Japanese textiles. The exhibition had several very fine objects, made with a variety of techniques - embroidery, weaving, appliqué, dying etc. I don't really have much to say about the exhibition, as it was very much a "look at the pretty stuff" sort of thing. And no photography coz it would damage the items.

I would've bought a postcard, but there wasn't one of my favourite object - this was a four-paneled screen with a golden peacock and peahen embroidered on it (link goes to the museum's page for the screen). I like it both for the design (which is very striking) and for the quality of the work. From a distance it looks like gold on lacquer, and it's only when you get up close you can see that it's embroidered. And if you look closely you can see that each feather in the peacock's tail has been stitched in full, no short cuts. So a feather in the back had all its frondy bits coming off the main spine, and then a feather in front stitched over it etc.

The exhibition as a whole made me want to take up stitching again, but I think I've too many projects going on at the moment, perhaps I'll come back to that some time though :) And I should learn something about Japanese history, I had never heard the term "the Meiji period" before.

I had a look around the earlyish Chinese stuff that they have in the museum - the galleries are split into two, Neolithic to 800AD and 800AD to the present. As I'd been reading about Chinese pre-history & the pre-unification dynasties I looked mostly at that stuff but I did also look at the Tang Dynasty pottery because I like that. And took pictures :) They're up on flickr, as always. 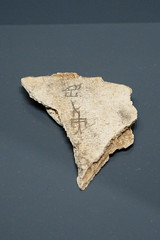 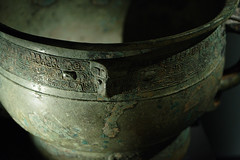 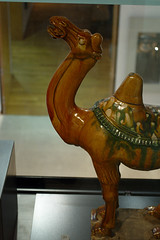