Seated Figure from the Kingdom of Ife Exhibition 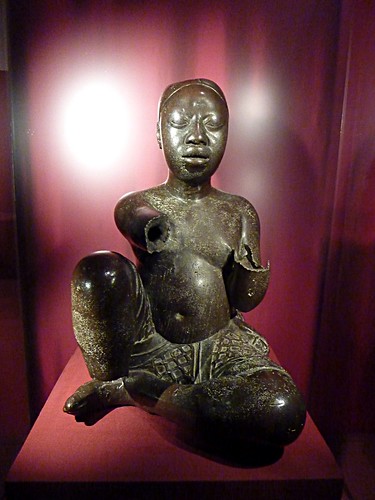 I really liked this sculpture in the Kingdom of Ife exhibition. It's cast in pure copper, which is apparently harder to work with than its alloys coz the melting point is higher. Or so the label next to it told me. It also told me that when it was in a shrine in a village called Tada it was cleaned every Friday by taking it to the river and scrubbing it in gravel! They had a photo from the 50s of it sitting overlooking the river, in fact. And looking at that again (in my photo of the label) I kinda wonder about the damage (which is there in the 1950s photo), as most of the damaged sculptured heads they had were labeled as having been hit by a pickaxe during discovery (like when building a road or something). But this was in a shrine in modern times, so I wonder when it had the holes knocked in it. Plenty of time between the late 1200s/early 1300s when it was made & the 1900s when it was in a shrine, I guess - it could've been lost and found a few times over. Particularly as (unlike neighbouring Benin) the culture of Ife did not survive through into modern times, as I understand it.