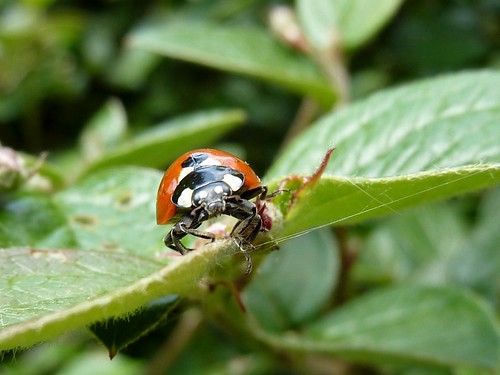 I spent some time out in the garden yesterday taking photos - mostly of flowers but also of insects and seeds and leaves :) Uploaded a whole bunch to flickr in the evening, I'm pretty pleased with how some of them turned out. As well as the one in this post, I'm currently using this one as my backdrop in linux, and this one in windows (although that may change, I think I might lose some of my desktop icons amongst the dandelion seeds ...). Other favourites are here, here, here, and here - but I like all of them that I put up :)

I think I need to read the manual for the camera, or look for stuff about it online, to see if there's a way to choose where it focuses - it's not really the right sort of camera for taking this sort of photo. But having said that, these are pretty good for handheld autofocused photographs ;)

These only have the most basic of edits - tweaked the levels a bit on some and cropped some of them. I've got a project sort of in mind for some of these (and will need to take more) - so far I have a maybe title, a feel for the structure and a non-verbal/non-visual impression of what the end product will be like. And it'll involve both "unedited" photos and manips (some of which I've got a similar non-verbal/non-visual impression of). We'll see how it goes, I need to write some notes somewhere, particularly of the structure, coz I think it'll take me a while to put this together.