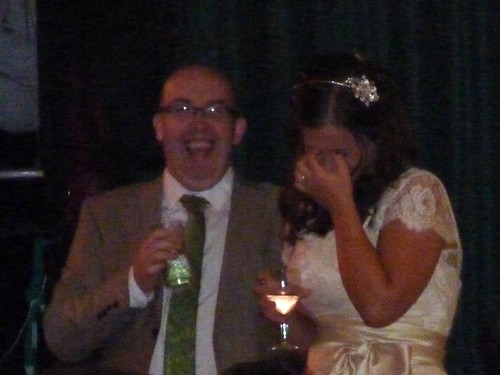 Reaction to the Speech ;), originally uploaded by plingthepenguin.

Our friends Ed & Tash got married last month, they had the ceremony in Italy and Friday night they had their wedding reception in this country. It was a fun evening :) Music was provided (I think) by the guy who does Luna Junkie & then the not-Ed guy that does Dadrock. I even danced a bit - but J really wasn't interested in dancing to the Dadrock stuff so I was dancing on my own & didn't stay on the dancefloor for very many songs. There was also a speech - well, 2 coz Ed said a few words, but the main one was Tash's Dad ... who's quite a character and had clearly been at the beer a bit by this stage too ;) I'm pretty sure the bit that made me laugh most was a planned joke, when he pointed out his "lovely wife Diane, over there with her vibrator on her head!" ;) The delivery of it was spot on.

Took a few photos & some of them even came out well enough to upload - the camera was struggling a bit with the low lighting and generally I was zoomed in too much for the flash to illuminate the right people ;) The set on flickr is here, and there's even a couple of vids (which are a little dark but still visible, I think - only one uploaded so far, flickr is hating me).

Sounds like Ed & Tash had a good party :) We certainly enjoyed it!