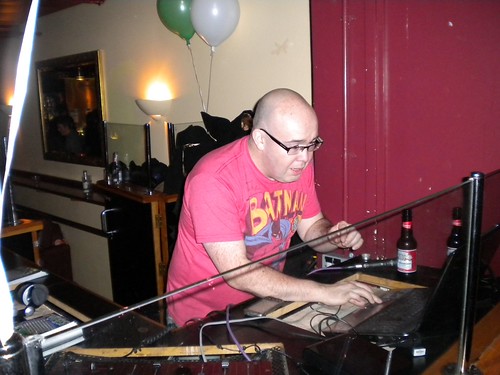 Last night was Furry's 10th Birthday Party - a month late, because the first Friday in December was so full of snow that Ed couldn't even get to the venue and you can't have a club without the DJ ;) We took the littlest camera and a few pics are up here and on facebook.

I think the first Furry we went to was Feb '01, and we only missed a small handful over the next 7 or 8 years, so even tho we haven't been for a while we weren't going to miss the birthday night! Ed had written up a history of Furry, with photos, on four posters which was neat to read & started us off reminiscing about previous years which was kinda fun. Remembering The Attic, which was the first venue for Furry and still the best one (it shut, then was turned into flats much later, such a shame). And the Venue, which as club spaces go sucked - it looked like a school hall - but Furry was still good there (even if the poster did remind me of the many times you'd have to go find one of the staff to get them to clear up the vom on the dance floor ...mmmm, classy, not). Ed had apparently primed the bar staff last night that I'd complain about the beer - I didn't! (tho I did express my shock when they were running out of lager (no bitter on offer) by about 1am - seriously, one brand was already gone and the others were close to gone, and no more apparently, so I bought a double round ;) ). That was also to do with the Venue, coz the beer on tap there was often really bad.

All that almost sounds like bad things, but I'm sitting here grinning away to myself again thinking back on it all. Had an ace time last night, too - danced for the last hour (as did Ed, leaving Stevo on the decks with instructions, and I don't think I've had that many hugs off Ed in one evening before - he was pretty pickled and really pleased with how well the night had gone).

Still unlikely to start going again - yes, that is partly coz we're getting older (I've been so tired/hungover today and I don't bounce back the way I used to). And partly coz the music did change over the years - even tho last night was partly retro stuff coz it was celebrating 10 years, it still didn't cover lots of my favourites (you have to play what the crowd want, after all, and I don't think the Stone Roses would've fitted in as an example) and I think a normal setlist would be mostly current indie that I'm a lot less into.

Good night out :) Happy Birthday Furry! And go Ed for running such a successful & long-lasting night :)